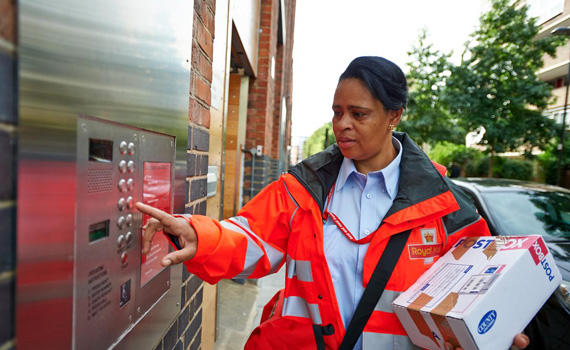 Royal Mail is the UK’s most trusted letters and parcels delivery company, supporting customers, businesses and communities around the country. It is the designated Universal Postal Service Provider and the only company delivering a ‘one-price-goes-anywhere’, six days a week service to more than 29m addresses across the UK. Its vision is to be recognised as the best delivery company in the UK and across Europe. Royal Mail floated on the London Stock Exchange in October 2013 and is now a member of the FTSE 100.

Royal Mail is one of the UK’s major employers – employing some 143,000 people, with one in every 180 employees in the UK working for Royal Mail. As part of the privatisation, Royal Mail employees were given free shares in the company. Currently over 93% of employees are shareholders which is equal to approximately 135,000 people. It is a major purchaser of goods and services and in the financial year 2014/15, Royal Mail was the sixth largest contributor to the economy of all UK corporations. Its impact on the UK economy amounted to £11.1bn in direct and indirect contributions, including employment, procurement and taxation.

Royal Mail’s origins can be traced to 1516, when Henry VIII ordered the creation of the first national postal service. Called ‘The King’s Posts’, it was devised by Brian Tuke and commanded all towns to have a fresh horse available for anyone carrying mail from the Tudor Court.

“Traditionally, Royal Mail is seen as a male-dominated organisation – and the figures reflect this,” observed Kay Clements, who is in charge of Diversity and Inclusion for Royal Mail Group.

According to Moya Greene, Royal Mail’s Chief Executive Officer, “Women currently represent 16 per cent of the overall workforce and 19 per cent of our management structure – not including senior managers. Within Operations, this reduces to 14 per cent for overall employees and for managers.

“We recognise that businesses with a diverse workforce are likely to attract a wider customer base, have the ability to recognise new potential markets and to provide a better, more tailored service to meet individual needs. So there are clear commercial benefits to be gained by employers who take every step to ensure that they recruit from the widest possible talent pool.”

“Royal Mail employed even fewer women in the mid-1990s – and it was at that time that the company came across The Springboard Consultancy (SBC), a UK-based international training company specialising in addressing women’s development issues,” said Kay. “Royal Mail set up a pilot Springboard programme in the South West of England and the results were encouraging.

“Then, in 2005, a company survey revealed what appeared to be a lack of confidence among our female employees. It seemed that this issue was preventing them from seeking new responsibilities along with challenging inappropriate behaviour and language in the workplace.

“At that time only thirteen per cent of our managers were women. We were in the process of developing a Gender Strategy and, since the survey revealed an apparent lack of confidence and self-esteem, this was included in it.

“Having worked with SBC in the 1990s and gained such positive feedback from the participants, we knew exactly who to contact in 2005.”

In this case, the programme not only aims to help women reach their full potential but also aims to make the Royal Mail an employer of choice for those joining the workforce in the next five years. As Moya said, “Any business that doesn’t recognise women’s role in making it successful will, inevitably, fail.”

In addition, in 2010, Royal Mail Group had set up a Gender Steering Group. Chaired by the Royal Mail’s Chief Operations Officer, Sue Whalley, this Group carried out a survey of some of its female managers to identify the barriers they perceived to career progression. The results showed that some of these women lacked the confidence to go on training courses; felt that there were insufficient female role models in the business; were unsure of the development opportunities available to them; didn’t see ‘opportunities’ as personal development opportunities, and would value a personal support and mentoring scheme.

“This prompted us to consider what extra work-based development opportunities we could introduce – and the answer was to expand the provision of the Springboard programme,” said Kay. “This programme is now seen as among the company’s ‘flagship development opportunities’ – and is a key part of Royal Mail’s Gender Action Plan, helping women to know what they want and have the confidence to get it. It’s helping women to address issues in the workplace and at home – and improve their experience of working for Royal Mail Group.”

From 2005 to 2012, Royal Mail had run some 50 Springboard programmes, reaching over 700 women, and over ten per cent of these women progressed to take up management roles. Typical feedback from line manager evaluations of the programme shows that, having completed Springboard, participants:

However, by 2012, Royal Mail realised that it needed to ‘raise its game’ where women in operational and front-line jobs were concerned. The company’s Gender Steering Group (GSG) agreed to support a further 1,000 female non-managers through the Springboard programme during 2013/14. This was endorsed by Royal Mail’s Corporate Executive Committee (CEC) and meetings took place with the company’s operations managers to support the programme. The initiative also received full trade union support.

The week-long facilitator training took place in February 2013. A start up meeting with the project team, coordinators and facilitators took place in March 2013. Any concerns that insufficient numbers of women would apply for places on the Springboard programme proved unfounded. Some 1,600 women expressed an interest in participating – necessitating training more in-house facilitators to deliver the programme.

“Our corporate experience with the Springboard programme shows that it gives women the confidence – and the assertiveness skills – to challenge a traditional ‘male dominated culture’,” said Kay. “It helps them to develop communications skills – and one of the by-products of this is that any disagreements now tend to be dealt with outside the formal complaints procedure. We’ve certainly seen a reduction in the number of complaints made by women.

“The most recent figures from those on the Springboard programme show that about half of them have now written a CV; some 43 per cent have taken on extra responsibilities at work, and 20 per cent or so have moved into management grade jobs,” Kay revealed.

“Moreover, 88 per cent of the programme members say that they are now likely to remain in Royal Mail’s employ. This is an interesting statistic because, although we’re finding it easier these days to recruit women to jobs in Royal Mail, retaining those women in business has proved a challenge.”

Recruiting into operational roles remains a focus for Royal Mail and one of the enablers for this is trade union support. Therefore one of the other objectives was to increase the number of trade union representatives who are female.

“We included some female trade union representatives among the guest speakers at these Springboard programmes. Perhaps as a result of this, a number of the women on the Springboard programme have now become trade union representatives themselves, forming a virtuous circle in attracting more women into the business,” Kay explains.

The pilot Spring Forward programme, aimed at enabling women to move into middle management roles, was completed in the summer of 2015 with encouraging signs. Kay added, “Indeed, the results are so encouraging that we might look at running a similar programme for Black and Asian employees. We would also consider running the programme to support men to become efficient and productive middle managers.”

“We’re already seeing the benefit of the whole Springboard initiative as more women are applying for management roles,” commented Kay. “Programme participants have taken on more responsibility at work, planned to either move to a different job role or to progress into management roles. A number of participants plan to continue improving the skills and confidence they’d developed on Springboard, while others intend to attend additional development activities to gain internal and/or external qualifications.”

Having completed a Springboard programme, participants are given a Royal Mail network address. This allows them to access a separate website, via Yammer, to get work-related hints and tips – and this helps them develop work-related skills, making them more productive and effective at work.

Today Royal Mail is recognised a one of The Times’ Top 50 Employers for Women. It is one of only six FTSE 100 companies with a female CEO and has relatively high gender diversity at Board and senior management grades where 33 per cent of members are female. On average FTSE 100 companies have 23.5 per cent female representation on their boards. This encouraging performance continues at senior management level where 29 per cent of our employees are female.

One of the key learning points has been to ensure the initiative is supported by the CEC – and that the support is visible and formalised. All of Royal Mail’s CEC members now work towards diversity targets, which include the proportion of women amongst new recruits. Senior stakeholder endorsement of the programme has, in turn, made it easier to sell to operational managers in the field. Having a robust deployment plan and consistent messages has also maintained interest from all parties.

“Springboard is part of our corporate DNA now – and an integral part of our gender strategy,” said Kay.